Lessons to Learn from The Ants and Its Colony 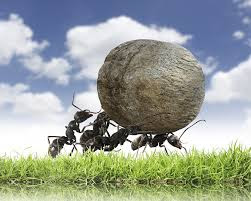 Ants may be seen as an insect, inferior to human in body size and weight. They sometime come to our homes as invaders, and most times we just can’t watch and squish them.

This morning, I was thinking about the power and influence of unselfish togetherness, and then I remembered the ants. How united they are in accomplishing a goal. Not only did I find that they are united, I also found out so many life lessons we human can learn from them.

Don’t ever give up. Be persistent

Ants are known for not giving up; they are relentless in the pursuit of their goal. When they meet an obstacle (Objects, Rocks etc), they don’t complain and sit down in self pity. Instead, they find a way over or around the obstacles and keep moving till they reach their final destination. Napoleon said, "Victory belongs to be persistent"

Ask for help, if the burden is too heavy.

Ants in their small sizes often carry food or task that is many times bigger than their sizes. An ant knows it limit. It doesn’t get itself exhausted. When a lone ant finds a food or task to carry out, it signals to other ants and they come in an unselfish unity to accomplish that task.

The ant doesn’t see itself as the boss, because he found the food. They are selfless

The ants march one after the other in line, without accident and dispute. They are not divided like man who craves for division because of selfish gain than unity.

Ants are well discipline; you can see it when an ant or ants carrying an object, the ant without a load make way for those with load. They don’t over-help each other.

In an Ant Colony they have the Queen(s), workers and males. Everyone is important, each doing different job. There is a decentralized structure, division of labour, no rules and no boss. Despite no rules and no boss, nothing is left undone in their colony.

Planning and Acting in time.

Good planning and thinking doesn’t come by the size of one’s head nor does looking ahead come by a bigger eye.  Ant plans, they think summer in winter, and winter in summer. They recognize seasons, and they don’t get fooled by season of plenty. They plan and act in time, by harvesting in times of plenty and storing, because they know there will be season of lack. If only, all humans plan and act in time.

Ants are selfless; they share among themselves everything they get. They send message to others, because they are so much interested in each others. That is the opposite of some human being, when they find something that could change the lives of others or help someone; they want to hoard it to themselves and make it unreachable to others.

Their art of hardworking and determination is being noted by the sizes of objects and foods they carry, the task they do. They don’t concentrate on how big the object is rather their pleasure is in the gain they will enjoy when it gets to their colony.

It will do a lot of good if we human don’t put so much attention on the size of our task, goal or vision, but to put more focus on the possibility of accomplishing it and the joy it will bring.

We can incorporate all of these characters and lessons from the Ant into our individual lives, family and organisation. I believe it will help make our lives better and our community a better place to live in.

TIPS ON HOW TO BE A SUCCESSFUL PERSON

TIPS ON HOW TO BE A SUCCESSFUL PERSON

1.       IDENTIFY WHO YOU ARE
This is the first step to assuredly journey on the path of success. Most people live their lives without knowing who they are, they know their names and origin, but they do not know the strength that lies within them and who they could have become if they make good use of their strength. Knowing about our strength and weakness helps us to know where we can always get the best out of ourselves.

Can everyone make plans? Yes. But does everyone make realistic plans? Maybe. Plans can only be actualised when they are real. You don’t draw a plan on how you want to score a goal in a match on the soccer pitch without being a member of any of the football teams that will play in the match; you are either among the football players or the coaching staffs before such plans can be brought into reality. So, be realistic in making plans.


“By failing to prepare, you are preparing to fail.” – Benjamin Franklin

3.    START WHERE YOU ARE AND USE WHAT YOU HAVE

It’s Okay to be scared when you have visions bigger than your present reality. Yes, it’s natural. But just start, start with the doubts.


“Don’t wait for something big to occur. Start where you are, with what you have, and that will always lead you into something great.” – Mary Manin Morrissey

Get a pen and a note; take notes of your achievement, failures and lessons garnered. Keeping records helps you to know the right way not to do past, activities, projects, assignments or anything the wrong way. It helps identify the strengths and weaknesses in your business.